Source: DTN News / ZeeNews.com
(NSI News Source Info) NEW DELHI, India - May 20, 2010: In a bid to strengthen surveillance in the 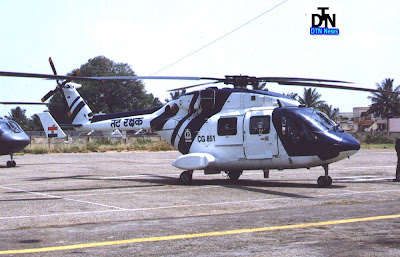 maritime zone, Coast Guard is planning to procure 14 twin-engine helicopters capable of operating from patrolling vessels. "We are planning to procure 14 shore-based helicopters for maritime surveillance and search and rescue operations," Coast Guard officials said here. The helicopters would be above medium-weight class and the twin engines on them would help in providing additional safety to the air crew while operating over the sea.
The global tender (request for Proposal) to procure the choppers was in the process of being formalised and will be released soon, they said. On the specifications of the choppers, officials said they should have a minimum range of 200 nautical miles and be capable of providing 360 degree surveillance, detection and reconnaissance. They should be able to carry out operations both day and night.
The Coast Guard is also planning to have data link capabilities in the choppers so that data can be exchanged between the different aerial assets in air and the shore and ship-based command centres. The choppers will also be equipped with light and medium machine guns, they said.
Coast guard, which has a fleet of Cheetah/Chetak and ALH Dhruv helicopters, is strengthening its rotary wing aerial surveillance capabilities after the Mumbai attacks and is in the process of acquiring several light and medium weight surveillance choppers.
Most of the new acquisitions are part of government’s efforts to strengthen the presence and capabilities of the Coast Guard in coastal areas and to prevent terrorists from using sea routes to attack cities.
To strengthen the coastal security mechanism, several fast-track acquisitions worth thousands of crores of equipment such as fast attack crafts, patrolling vessels, Dornier surveillance aircraft and helicopters and coastal radars were sanctioned by the government.
Posted by Defense-Technology News at Thursday, May 20, 2010