Source: DTN News / Military World
(NSI News Source Info) TORONTO, Canada - May 30, 2010: US Forces-Afghanistan released its findings today from the investigation into the Feb. 21 civilian casualty incident that killed up 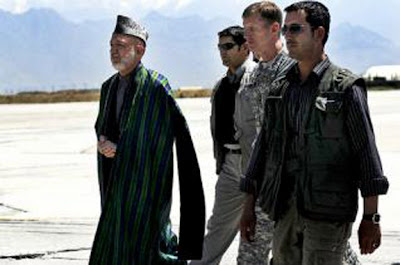 to 23 Afghans and injured 12 others in Uruzgan Province.
The extensive investigation report submitted to Gen. Stanley McChrystal, Commander NATO ISAF/U.S. Forces-Afghanistan cites several shortcomings in training, communication and decision-making, and offered numerous recommendations.
Gen. McChrystal has directed that certain actions be pursued immediately. "Our most important mission here is to protect the Afghan people; inadvertently killing or injuring civilians is heartbreaking and undermines their trust and confidence in our mission. We will do all we can to regain that trust," he said.
The investigation, led by U.S. Army Maj. Gen. Timothy McHale, Deputy Commander for Support, U.S. Forces Afghanistan, reviewed the actions of a U.S. Special Forces Operational Detachment Alpha (ODA) unit and its higher headquarters, coalition aircraft, and support provided by U.S. Air Force Predator Unmanned Aerial Vehicle (UAV) personnel. The report concluded that three vehicles carrying more than 30 civilians were mistaken for an insurgent convoy and engaged by coalition aircraft. The ODA ground force commander believed the vehicles contained a group of insurgents attempting to execute a flanking maneuver to reinforce insurgents in his area.
Gen. McChrystal, who offered a personal apology to the Afghan people and met with President Hamid Karzai immediately following the Feb. 21 incident, briefed President Karzai on the findings of the investigation earlier this week.
"This was a deeply regrettable incident and I share the sadness felt by the people of Afghanistan over this loss of innocent life," said President Karzai. "General McChrystal pledged to me that the most exhaustive investigation would be conducted to determine what happened and why, and I believe this has been done. I am also confident that appropriate actions are being taken with regard to those involved in the incident, and most importantly, to ensure measures are taken to prevent such accidents from happening again."
Investigation recommendations approved by Gen. McChrystal entail actions to be taken in pre-deployment training, as well as the conduct of operations in Afghanistan.
* U.S. Joint Forces Command (JFCOM), which is responsible for pre-deployment training at individuals' and units' home stations, will review and implement several changes in training. These include a rigorous series of challenging Counterinsurgency (COIN) training scenarios, use of case studies and vignettes to better educate and train for leading COIN operations, and standardization of terminology for use in the highly-stressed operational environment, which will be reinforced in pre-deployment training.
* ISAF Joint Command (IJC) and the U.S. Forces-Afghanistan J7 Training Directorate will develop a Mobile Training Team to evaluate and train unit command posts in the field on COIN operations, and develop an ongoing program to better educate and train for leading COIN operations. This will include intensive training on the process of identifying and engaging combatants in accordance with Rules of Engagement and Tactical Directives that govern operational conduct. * All units identified in the report are also directed to incorporate or retrain on the appropriate procedures for Civilian Casualty reporting.
"As partners with the Afghan people in our mission, we must always be honest with ourselves about what we do well and what we can do better," said Gen. McChrystal. "When we make a mistake, we must be forthright and we must do everything in our power to correct that mistake. I know our actions following this thorough investigation will help us to prevent mishaps that result in harm to the people we are sworn to protect."
The recommendations of the investigation report are responsive to findings of deficiencies that contributed to the accident. These included:
Although the ground force commander displayed tactical patience in letting the situation develop for several hours before the engagement, the UAV crew provided inaccurate reporting and in-country command posts failed to properly analyze the situation.
The ground force commander lacked a clear understanding of who was in the vehicles, the location, direction of travel and likely course of action of those vehicles.
Poorly functioning higher headquarters command posts failed to provide the ground force commander with the evidence and analysis that the vehicles were not a hostile threat.
Information that the convoy was anything other than an attacking force was ignored or downplayed by UAV personnel.
Following a review of Maj. Gen. McHale's investigation, Gen. McChrystal issued General Officer Memoranda of Reprimand (GOMOR) to four officers, including senior leaders at the Battalion and Brigade level. The GOMORs, while administrative in nature, may be placed in the official record of each of these officers once they have had a chance to respond. Gen. McChrystal also issued Memoranda of Admonishment to two junior officers involved, which will remain in their local file.
Also included among recommendations adopted by Gen. McChrystal is a request to Headquarters, U.S. Air Force to develop command level guidance on tactics, techniques and procedures (TTPs) regarding employment of Remote Pilot Vehicles. He also requested an Air Force investigation of the assessments made and actions taken by the specific UAV crew involved.
*This article is being posted from Toronto, Canada By DTN News ~ Defense-Technology News, contact: dtnnews@ymail.com
Posted by Defense-Technology News at Sunday, May 30, 2010