Source: DTN News - - This article compiled by Roger Smith from reliable sources Joshua Kucera - Eurasianet.org
(NSI News Source Info) TORONTO, Canada - August 31, 2011: Kyrgyzstan's Prime Minister Almazbek Atambayev has declared that the U.S. will have to leave its air base at Manas in 2014. In some comments to Russian journalists, reported by 24.kg, he said the government will fulfill the current agreement it has with the U.S., but then no more: 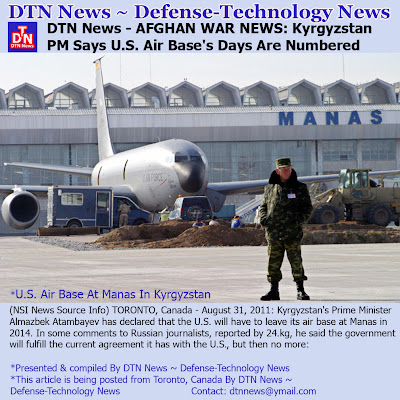 “You know, the former leadership of [the Kyrgyz Republic] with their biased attitude towards the undertaken international obligations has already spoiled outside image of Kyrgyzstan. In order to break that image somehow, we just have to execute an already concluded agreement. The contract for the Transit Center will expire in 2014. Our position is the following: we will notify in six months the U.S. side of the termination of the contract in full compliance with assumed obligations and from 2014 there will be the first major civilian international transport junction. Any capital can participate in the formation of his transport junction even though the Russian although the western.”

(That last comment appears to reference his previously stated plan to turn Manas into an international cargo transit facility.)

Needless to say, this shouldn't be taken as the final word. 2014 is three years away, who knows if Atambayev will still be in the government, and the U.S. hasn't had a chance to negotiate. Still it's an interesting statement by Atambayev, one of the leading candidates in Kyrgyzstan's October presidential elections. He seems to be trying to position himself as the pro-Russia candidate, so this is a natural political position for him to stake out.

Atambayev did break a bit of news, saying that the contract with Mina Corp will end, and the Kyrgyz-Russian joint venture will take over, next month:

“The situation when kerosene was supplied to the base through a series of unintelligible middlemen is reaching back. We have already agreed on a contract in all respects, in terms of deliveries, in volume with the Russian side and with the USA. The contract will be signed in September and the first delivers will begin. We will start with ambitious plans; the joint venture must demonstrate that it copes with assumed obligations within three months. Then in prospect we want to bring its share in the supplies of up to 90 percent of all jet fuel the base requires,” noted Almazbek Atambayev.

In June, an industry analyst told my EurasiaNet colleague that the departure of Mina Corp. will be a "major headache" for the Defense Logistics Agency, the Pentagon organization that manages fuel deliveries to Manas. That's because Mina Corp., for all its murky background, has a solid record of delivering fuel on time to the base. There's no guarantee that the new joint venture will do the same.

Kyrgyzstan’s April Uprising: Path to Change or Death in Vain?

The War Continued
Afghanistan: The Risks of Rising Anti-American Feelings in Kabul

Posted by Defense-Technology News at Wednesday, August 31, 2011 No comments:

Source: DTN News - - This article compiled by Roger Smith from reliable sources By Gergo Racz - WSJ
(NSI News Source Info) TORONTO, Canada - August 31, 2011: Hungary’s government has decided that it would part with the 24 planes to raise cash after they were retired from active duty. 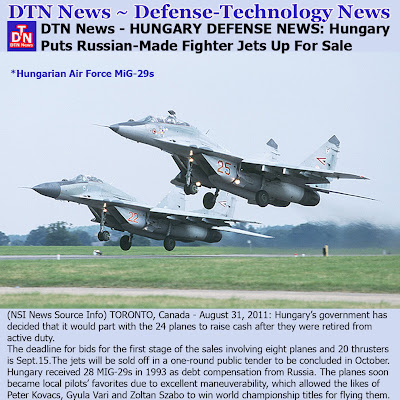 The deadline for bids for the first stage of the sales involving eight planes and 20 thrusters is Sept. 15. The jets will be sold off in a one-round public tender to be concluded in October.

The MIG jets were designed by Soviet Union-based airplane factory Mikoyan and entered service in 1983. They’re widely used short-range fighters, originally developed to counter advanced models in the U.S. Air Force, such as F-15 or F-16. Mikoyan has since been merged into JSC United Aircraft Corporation, publicly traded in Russia, with the government retaining a majority stake.

Hungary received 28 MIG-29s in 1993 as debt compensation from Russia. The planes soon became local pilots’ favorites due to excellent maneuverability, which allowed the likes of Peter Kovacs, Gyula Vari and Zoltan Szabo to win world championship titles for flying them.

However, there were also downsides. MIGs are well-known for their high maintenance costs and high fuel consumption. Some planes in the fleet actually had to be salvaged in order to get spare parts to repair the others.

Also, when Hungary became a member of the North Atlantic Treaty Organization, or NATO in 1999, it became apparent that there would be compatibility issues. Instead of trying to prolong the MIGs’ lifespan and upgrading their systems, the government decided to replace them with Gripens manufactured by Sweden’s Saab.

If you can fork out at least 3.46 billion forints ($18.3 million), the minimum amount the ministry would accept for the package, you’re good to try. The deals are subject to the manufacturer’s approval.

Posted by Defense-Technology News at Wednesday, August 31, 2011 No comments: