Source: This article compiled by Roger Smith from DTN News(NSI News Source Info) TORONTO, Canada - December 30, 2011: To Our Readers and Viewers of  DTN News Plus Everyone in the Global Village, A  Very Happy Prosperous New Year 2012, Best Wishes from DTN News ~ Defense-Technology News 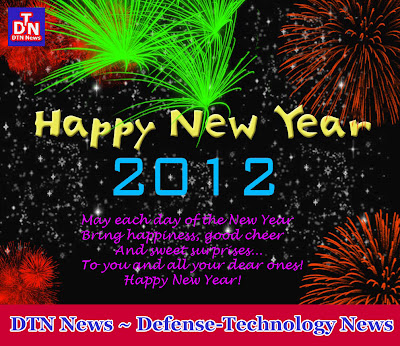 Source:  This article compiled by Roger Smith from DTN News
(NSI News Source Info) TORONTO, Canada - December 30, 2011: To Our Readers and Viewers of  DTN News Plus Everyone in the Global Village, A  Very Happy Prosperous New Year 2012 from DTN News ~ Defense-Technology News. Tigers are the largest members of the cat family. They live in Asia and belong to the same genus as the lion, leopard, and jaguar. 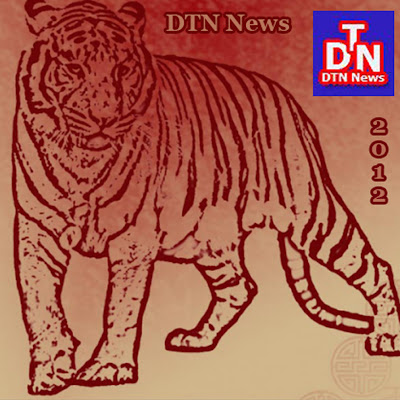 Source: DTN News - - This article compiled by Roger Smith from reliable sources BBC News(NSI News Source Info) TORONTO, Canada - December 29, 2011: Prosecutors in Kazakhstan have opened a criminal inquiry into the use of weapons by police after 16 protesters were killed earlier this month.The deaths occurred in clashes between police and oil protesting workers in Zhanaozen on 16 and 17 December. 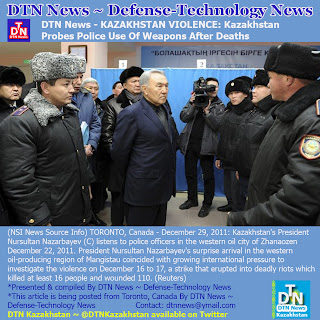 A "criminal enquiry into the use of weapons by the security forces" had been opened, the prosecutor-general's office said on Thursday.The violence was the worst since Kazakhstan's independence 20 years ago.The investigation comes after video footage emerged on the internet appearing to show security forces beating and shooting people.Eyewitnesses said police fired on unarmed oil workers, who had been protesting for months, in the town of 90,000.But police say they were forced to defend themselves. A 20-day curfew is in effect until 5 January."General prosecutors opened a criminal enquiry into the use of weapons by the security forces which were aimed at hitting (their targets) and caused death," the prosecutors' spokesman Nurdaulet Suindikov said in a statement."An investigation group headed by a special prosecutor will carry out the investigation to ensure impartiality," the statement added.The move marks the first time since the incident that Kazakh prosecutors have accused the police of firing on the protesters. Last week Kazakhstan asked the UN to help investigate the violence.Separately, the privately-owned Interfax-Kazakhstan news agency reports that 18 people accused of taking part in the disturbances and looting have been arrested.The governor of the Mangistau region, where the clashes occurred, has reportedly been sacked, along with the local boss of the state oil firm.President Nursultan Nazarbayev has fired his son-in-law, Timur Kulibayev, from his position as head of Kazakhstan's sovereign wealth fund, which holds stakes in the companies whose workers were striking.Correspondents say Mr Nazarbayev is keen to maintain his country's reputation as a bastion of stability in central Asia. 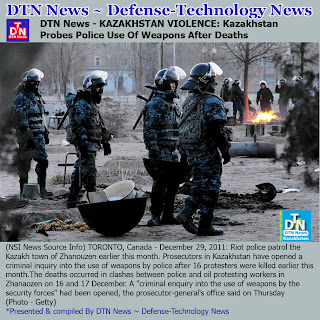 North Korea was Tuesday preparing a massive ceremonial farewell to late leader Kim Jong-il as it strove to strengthen a new personality cult around his youthful son and successor Jong-un.
The secretive state has so far given no details whatever of Wednesday's funeral for its "Dear Leader" of the past 17 years. 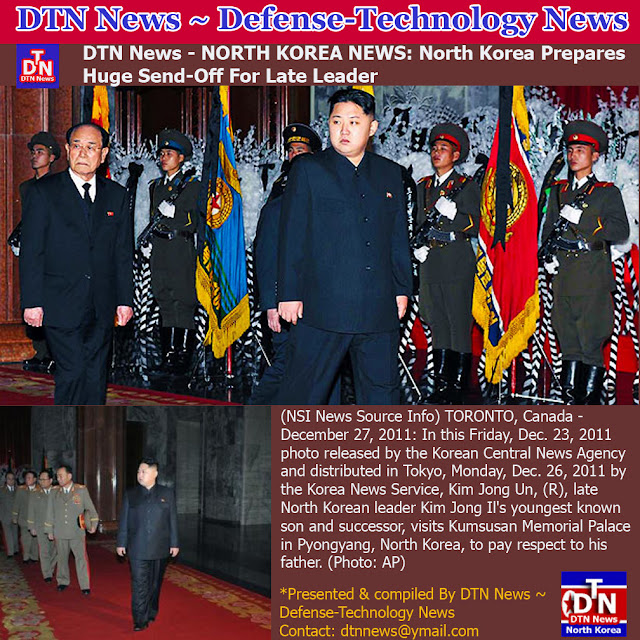 But analysts say the regime, as it did in 1994 when Kim Jong-il's own father died, will use the event to shore up loyalty to the new leader and will likely mobilize hundreds of thousands of people.
The untested Jong-un, aged only in his late 20s, has been thrust into the world spotlight since his father died suddenly on December 17 aged 69.
Official media has added several titles to his flimsy CV, declaring him "great successor", supreme commander of the world's fourth-largest military and head of the ruling party's powerful Central Committee.
The son, who has not yet been formally appointed to the party and military posts, has been the central figure in scenes of mourning at the Kumsusan Memorial Palace, where his father lies in state in a glass coffin.
On Monday he met the leaders of two South Korean delegations at the palace, expressing "deep gratitude" for their presence, according to official media.
South Korea, which has remained technically at war with the North for six decades, has responded cautiously to the shake-up in its nuclear-armed neighbour.
Unlike in 1994, the Seoul government expressed sympathy to the North's people and made other conciliatory gestures.
But it authorized mourning visits to Pyongyang by just the two South Korean delegations, a restriction that the North termed "inhuman".
Lee Hee-ho, widow of late South Korean president Kim Dae-jung, and Hyundai Group chairwoman Hyun Jung-eun paid respects Monday to the late leader and expressed condolences to Jong-un.

Kim Dae-jung and Kim Jong-il held the first-ever inter-Korean summit in 2000 and Hyundai pioneered cross-border business projects.
While Kim Jong-il had 20 years to prepare for the communist world's only dynastic succession, Jong-un has had barely three. Analysts will closely watch the funeral for possible clues about who will have most influence with him.
Jong-un, "great successor to the Juche (self-reliance) revolutionary cause and sagacious leader of our party, state, army and people, is at the helm of the Korean revolution", the North's news agency reported early Tuesday.
South Korean media, basing their predictions on arrangements for the 1994 funeral, said the obsequies would likely begin at 10:00 am Wednesday, with Jong-un and senior officials paying final respects at the memorial palace.
They said the military was expected to fire a 24-gun salute and troops would march through central Pyongyang, accompanying a limousine carrying Kim's coffin and another car with a giant photo.
Military marching bands would play funeral music while convoys of motorcycles and cars carrying flowers and senior officials would follow the coffin as hundreds of thousands looked on, the media forecast.
Mourning will officially end Thursday with a nationwide memorial service including a three-minute silence, the North's media has reported.
On Tuesday the South Korean delegations, who were to return later Wednesday across the heavily fortified border, met the North's de facto head of state and parliament chief Kim Yong-nam, state media reported.
Lee and Hyun expressed hope that declarations agreed at summits in 2000 and 2007 would be implemented, it said.
On their way home they stopped off at the Kaesong industrial estate just north of the border — the last major joint venture still functioning, the South's Yonhap news agency reported.
The complex, utilising the North's labour in Seoul-owned light industries, has survived high cross-border tensions of recent years. 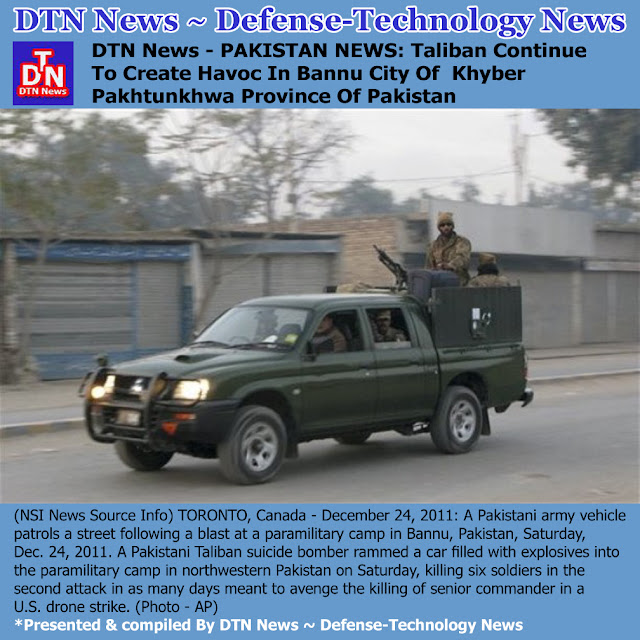 BANNU, Dec 24: Four security personnel were killed and 18 others injured when a suicide bomber rammed a car filled with explosives into a paramilitary camp here on Saturday.

This was the second major terrorist attack in two days in the restive region.

Official sources said the suicide bomber rammed the explosive-laden double-cabin Surf vehicle into the rear portion of the boundary wall of the Tochi Scouts headquarters in Bannu at around 5:30am.

Tehrik-i-Taliban Pakistan claimed responsibility for the attack on the camp, which is a base for Frontier Corps troops, also known as the Tochi Scouts, before and after deployment in North Waziristan.

“We claim responsibility for the attack, which was launched to avenge the killing of one of our commanders Taj Gul in a US drone strike in South Waziristan last month,” TTP spokesman Ehsanullah Ehsan said.)

The injured, four of them critical, were taken to the Bannu CMH.

According to bomb disposal squad, about 500kg of explosives were used in the attack.

Police recovered parts of the damaged vehicles. Security personnel cordoned off the area and arrested 13 suspects during the search operation.

They were shifted to an undisclosed location for interrogation.

Pakistan complete China clean-sweep with 2-1 win
Pakistan won the final match 2-1 to emerge unbeaten in the series after taking the first three games in Karachi and Faisalabad earlier this week.

Thousands gather at PTI rally in Karachi
Abrarul Haq was also among the speakers at the rally along with PTI leaders such as Samson Sharaf, Aslam Rajput, Dr Hasan Raza and Azam Swati.

Pakistan invites Whatmore to coach team
“We are in the process of finalising the appointment and in this regard are in discussions with Whatmore,” PCB chief operating officer Subhan Ahmed said.

Suicide bombing kills 10 in Afghanistan: official
A suicide bomber blew himself up Sunday during a funeral in northern Afghanistan, killing 10 people.

Twelve militants killed in Kurram Agency
One security personnel was also killed and four others were injured when militants opened fire in the Jogi area of Kurram Agency.

Firdous Ashiq Awan withdraws resignation
“The prime minister tore down my resignation and asked me to continue my work,” Information Minister Firdos Ashiq Awan told reporters after the cabinet meeting.

At least 25 dead in explosion at church in Nigeria
Several days of fighting in the northeast between the sect and security forces already had killed at least 61 people, authorities said.

Six die in latest school bus accident in China
At least six people have been killed in the latest crash involving students in China.

Musharraf-era pacts with US placed before PCNS
The Musharraf government had signed at least nine pacts with the US in 2002 to give shape to Islamabad`s role in the `war on terror`.