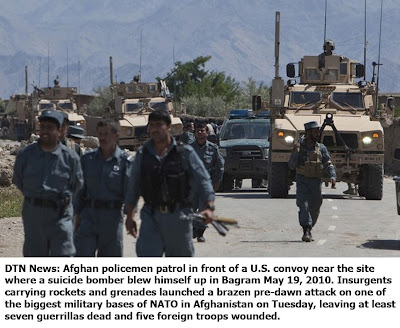 and seven guerrillas dead.
Taliban leaders claimed that seven suicide bombers had blown themselves up at the gates of the base, clearing the way for more than 20 other fighters to get inside. The Taliban reports appeared exaggerated, as they often are. But American officials confirmed that the base, one of the largest in Afghanistan, had come under an ambitious and unusual assault.
An American official said that the base had come under attack by as many as many as 30 insurgents. Another American spokesman, Col. Wayne Shanks, said that no suicide bombs had exploded and that no insurgents had entered the base. “At no time were Bagram defenses breached,” he said.
American officials said that the attack had ended by midmorning.
Still, details were sketchy. The main road leading to the base was sealed, and helicopters could be seen flying over the area. Local residents reported hearing gunfire around the base.
The Bagram base, located about 50 miles north of Kabul, the capital, is one of the main hubs of the American campaign in Afghanistan. Bagram serves as the headquarters for the military’s efforts in eastern Afghanistan. It is ringed by several layers of defenses.
The assault on Bagram comes on the heels of an attack Tuesday by a suicide bomber in Kabul, who rammed an explosives-laden bus into an American convoy, killing 18 people, including five American soldiers and a Canadian officer.
That attack — and the one on Bagram on Wednesday — appeared to be part of a larger campaign directed at the capital and its environs. In recent days, the Taliban have smuggled five suicide bombers into the area, an American military official said, speaking on condition of anonymity.
The back-to-back attacks came as American and Afghan leaders were preparing to launch a major offensive in the city of Kandahar to break the hold of the insurgents in southern Afghanistan.
Related News
Video: Afghan blast kills Nato soldiers Al Jazeera Video:
Afghan blast kills Nato soldiers
Afghan insurgents attack air base BBC News
Toronto Star - Vancouver Sun - Telegraph.co.uk - The Hindu - Wikipedia: May 2010 Kabul bombing
Posted by Defense-Technology News at Wednesday, May 19, 2010