Source: By Sherin Jabarkhil For CentralAsiaOnline.com 2010-05-19
(NSI News Source Info) KABUL, Afghanistan - May 30, 2010: Some officials in the Afghan capital are saying that offers of jobs, security, financial incentives 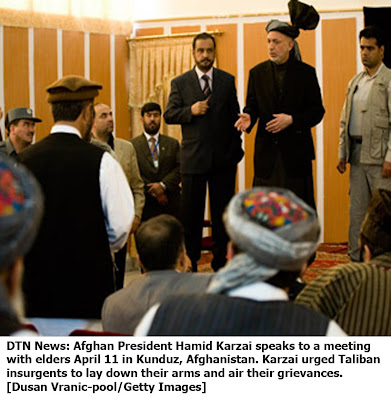 and exile have heightened existing tensions in the Afghan Taliban’s ranks.
The peace and reconciliation plan will offer those incentives to militants willing to denounce violence and accept the Afghan constitution, said an official who has been part of the National Advisory Peace Jirga, scheduled for the end of this month.
"Many insurgent commanders and foot soldiers are tired of insurgency and are waiting to join the government. The Hamid Karzai government already has gained the consent of the international forces in this regard", the official told Central Asia Online.
Tempting offers from the government are magnifying tensions among upper- and lower-level Taliban leaders, the official added.
Even the supreme Taliban leader, Mullah Omar, favours a peace deal, said a senior member of the Afghan National Council. Speaking on condition of anonymity, the council member told Central Asia Online that Mullah Omar was facing problems in his leadership and a lack of resources, making him willing to strike a deal.
Mullah Omar has been quoted several times as saying he is willing to talk with the Afghan government only after international forces leave the country. Other Taliban members reportedly are willing to negotiate before coalition forces leave, which may be one source of tension among Taliban factions.
Mullah Omar and his erstwhile military right-hand man, Mullah Baradar, might have differed on reconciliation. The Pakistani arrest of Mullah Baradar in February made the point moot, but some counterinsurgency analysts theorised that Mullah Omar wanted a role for Pakistan in any reconciliation with Afghanistan. On the other hand, analysts said, Mullah Baradar had reached out to the UN and the Afghan government, bypassing Pakistan.
After police arrested Mullah Baradar, Mullah Akhtar Mansoor, who served as civil aviation minister during Taliban regime, expected to be named Mullah Omar’s deputy. But a formal decree from the Quetta Shura promoted Mullah Qayum Zakir to that post and that of Taliban defence minister.
The promotion of Zakir did not sit well with Mullah Mansoor, according to sources close to the Taliban. Pakistani intelligence reportedly arrested Mansoor but released him after he accepted Zakir’s authority.
However, tensions in the south still exist between the two mullahs, observers on the scene have said. They often compete for power by increasing forces from their own tribes, a tribal elder in Helmand said.
Many counterinsurgency analysts say those two commanders are among the diehard Taliban leaders unlikely to give up, since they have ties to al-Qaeda. They also are closely allied to the Haqqani and Hafiz Gul Bahadur networks in North Waziristan, but are despised by some other groups within the Taliban and by some of the non-Taliban insurgent groups, such as Gulbuddin Hekmatyar’s Hizb-e-Islami.
The tension has not yet sparked intra-Taliban fighting, informed sources told Central Asia Online. But the sources reported combat between Taliban and Hizb-e-Islami fighters in many places, the most important of which was a battle in northern Baghlan province in March that took about 100 lives from both sides.
Battles within the Taliban for control of a zone or province are a serious matter, counterinsurgency experts say, because control of a province enables the victor to profit from the drug trade, kidnappings and donations from terrorist networks in foreign countries.
Whatever the reason for the rifts between militants, they serve the reconciliation plan, the anonymous official in Kabul said, because they spur more insurgents to contact the government about laying down their arms.
Disclaimer statement
Whilst every effort has been made to ensure the accuracy of the information supplied herein, DTN News ~ Defense-Technology News cannot be held responsible for any errors or omissions. Unless otherwise indicated, opinions expressed herein are those of the author of the page and do not necessarily represent the corporate views of DTN News ~ Defense-Technology News.
Posted by Defense-Technology News at Sunday, May 30, 2010