Source: DTN News / Aviation Week
(NSI News Source Info) NEW DELHI, India - May 20, 2010: India is turning to Europe for support of the naval version of its Light Combat Aircraft (LCA) after its initial choice of the U.S. 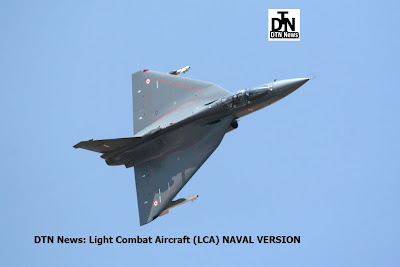 was stymied by an inability to gain the requisite approvals from Washington.
India selected Lockheed Martin as the winner of a bid for consultancy work on its naval LCA, but failure to secure U.S. State Department licensing approvals — at least in a timely fashion — now has resulted in EADS being in negotiation for the work.
This is not the first time regulatory issues have tripped up U.S. ambitions in India.
In April 2009 EADS picked up flight test work on the air force LCA as a result of Boeing being forced to withdraw. The U.S. manufacturer had been tapped for the project in 2008, but an inability to gain the required approvals from the U.S. administration forced it to pull its bid.
The naval LCA is being designed for short take-off, but arrested recovery (Stobar), with a first flight of the naval variant by December.
Neither EADS nor Lockheed are willing to comment beyond general statements. The U.S. company says it “continues to work with the U.S. government to support the LCA program. EADS, beyond confirming it has a consultancy contract (for the air force aircraft), says “both sides have agreed they will not disclose any details.”
In March, the Indian government told Parliament that “deficiencies have been detected in the airframe and other associated equipment of the naval LCA [navy]. The Defense Research and Development Organization [DRDO] is working out [approaches] with various organizations for rectifying these deficiencies by suitable modifications to the engine/airframe design.” The consultancy is intended to support this effort.
The consultancy on the naval LCA involves auditing the aircraft’s current configuration and optimizing the aircraft’s landing gear and arrestor hook design. The intent is also to reduce the aircraft’s all-up weight by around 1,000 lb.
Sources involved with the program indicated that Lockheed’s inability to begin the consultancy on time had impacted the development effort, but the program itself was on schedule and progressing well.
When ready, the naval LCA will primarily operate off Indian-built aircraft carriers, the first of which is under construction in Kochi. The sources also said that with almost all of the LCA’s equipping and cabling complete, the first prototype is scheduled to roll out of its hangar by mid-July. Three months of integration tests will follow, including ground vibration tests, structural coupling tests and other test routines before a first ground run and taxi test scheduled for October. If all goes well, the first prototype will fly in December.
The front fuselage of the first naval prototype is identical to the fighter trainer (PV-5) that began tests in November 2009.
The only part of the front fuselage in the naval prototype that will require a full routine of tests is a small additional control surface near the wing roots that is absent on the air force version. The naval variant will also have auxiliary air intakes.
Program officials admit that there have been multiple challenges in the design and configuration of the landing gear and arrestor hook assembly, especially in optimizing the aircraft’s sink rate, but were confident that it would prove itself during flight tests.
Apart from conventional takeoff and landing tests, the aircraft will undergo short takeoff and arrested landing tests at the Shore-Based Test Facility under construction at the Indian naval air station in Goa.
Posted by Defense-Technology News at Thursday, May 20, 2010