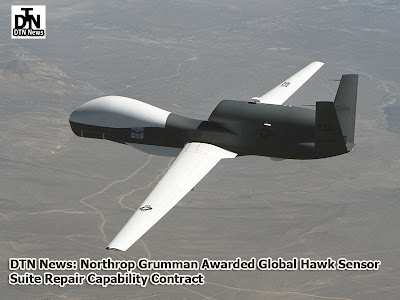 $50 million firm fixed-price/cost plus fixed -fee contract to provide the Global Hawk unmanned aircraft program with an interim repair capability for its integrated sensor suite (ISS) and the enhanced integrated sensor suite (EISS). The interim repair line, which will be separate from the current production line, will be located and operated at Raytheon Space and Airborne Systems (SAS) in El Segundo, Calif. Raytheon SAS is partnered with Northrop Grumman to provide the EISS imaging system for the Global Hawk Block 20 and 30 systems.
The sensor interim repair line will be the first dedicated repair facility to be established by the U.S. Air Force for Global Hawk, and will significantly improve the availability of the critical ISS and EISS components in support of increased operations tempo. The ISS deployed on Block 10 Global Hawks demonstrated the value of the wide area, high-resolution imagery from its synthetic aperture radar and its visible and infrared electro-optical camera. The EISS will improve on the ISS capability with a more than 50% increase in range and resolution. As a result, the Air Force is predicting that combatant commanders will require Block 30 Global Hawks to fly many more hours than had been previously planned. In addition, the new interim repair capability provides an important bridge to a fully independent depot-level repair program for the Global Hawk system.
"Northrop Grumman remains committed to providing the warfighter the most reliable resources to support their needs. The dedicated repair facility will further allow us to make this possible," said George Guerra, Northrop Grumman vice president of high altitude long endurance systems. Global Hawk flies autonomously at altitudes of more than 60,000 feet, above inclement weather and prevailing winds, for more than 32 hours at a time. The original advanced concept technology demonstration Global Hawks deployed overseas to the Persian Gulf less than two months after Sept. 11, 2001 with the original ISS. Since then, Block 10 Global Hawks have been flying nearly continuously, supporting combat operations in the region. The Block 30 systems, capable of carrying 50 percent more payload and providing more than twice the electrical power, will carry simultaneously both the EISS made by Raytheon plus the Advanced Signals Intelligence Payload (ASIP) made by Northrop Grumman. Block 30 aircraft are scheduled to begin operations with the U.S. Air Force at Beale Air Force Base, Calif., and at several overseas locations in Europe and the Pacific, this year.
Northrop Grumman Corporation is a leading global security company whose 120,000 employees provide innovative systems, products, and solutions in aerospace, electronics, information systems, shipbuilding and technical services to government and commercial customers worldwide.
CONTACT:
Sherri Pineda
Northrop Grumman Aerospace Systems
(858) 618-4556
(858) 943-1152 mobile
sherri.pineda@ngc.com
Posted by Defense-Technology News at Tuesday, May 18, 2010