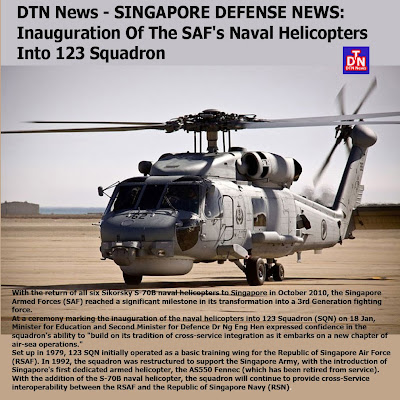 The 123 Squadron is the Singapore Armed Forces' (SAF's) first naval helicopter squadron. The squadron will join the Helicopter Group under the Republic of Singapore Air Force's (RSAF's) Participation Command, which was set up in 2007 to develop and deploy air power in support of land and maritime operations.

Speaking at the inauguration ceremony, Dr Ng highlighted that 123 Squadron's past experience in supporting Army's operations will provide an advantage in this new role in air-sea operations. He said: "I am confident that 123 Squadron will continue to build on its tradition of cross-service integration as it embarks on a new chapter of air-sea operations." Dr Ng also commended RSAF andRSN personnel for their professionalism which has enabled the SAF to build up a high level of operational proficiency and readiness in its integrated naval helicopter and frigate capability.

The SAF had earlier acquired six Sikorsky S-70B Seahawk naval helicopters. All six naval helicopters have returned to Singapore last year after a one-year deployment in San Diego, USA, with the RSAF's Peace Triton detachment. The integration of the naval helicopters with the frigates enables the SAF to undertake anti-surface and anti-submarine missions at longer ranges. Each frigate's sophisticated Command, Control and Communications suite allows it to network with a wide variety of SAF assets to increase force level awareness and mission effectiveness. The inauguration of the S-70B Seahawk naval helicopters into 123 Squadron marks a significant milestone in the SAF's transformation into an integrated and networked force.