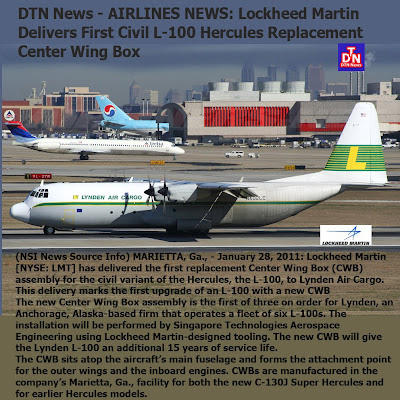 The new Center Wing Box assembly is the first of three on order for Lynden, an Anchorage, Alaska-based firm that operates a fleet of six L-100s. The installation will be performed by Singapore Technologies Aerospace Engineering using Lockheed Martin-designed tooling. The new CWB will give the Lynden L-100 an additional 15 years of service life.

The CWB sits atop the aircraft’s main fuselage and forms the attachment point for the outer wings and the inboard engines. CWBs are manufactured in the company’s Marietta, Ga., facility for both the new C-130J Super Hercules and for earlier Hercules models.

Lynden Air Cargo began operations in 1995 and is part of the Lynden family of companies providing multi-modal transportation services including air, ground, marine and logistics companies. Lynden’s fleet of Hercules has accumulated more than 125,000 accident-free flight hours since 1997.

Headquartered in Bethesda, Md., Lockheed Martin is a global security company that employs about 133,000 people worldwide and is principally engaged in the research, design, development, manufacture, integration and sustainment of advanced technology systems, products and services. The corporation’s 2009 sales from continuing operations were $44.0 billion.