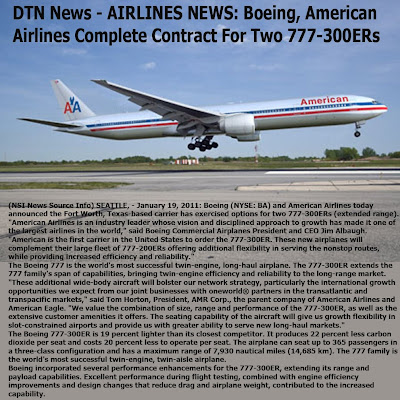 "American Airlines is an industry leader whose vision and disciplined approach to growth has made it one of the largest airlines in the world," said Boeing Commercial Airplanes President and CEO Jim Albaugh. "American is the first carrier in the United States to order the 777-300ER. These new airplanes will complement their large fleet of 777-200ERs offering additional flexibility in serving the nonstop routes, while providing increased efficiency and reliability."

The Boeing 777 is the world's most successful twin-engine, long-haul airplane. The 777-300ER extends the 777 family's span of capabilities, bringing twin-engine efficiency and reliability to the long-range market.

"These additional wide-body aircraft will bolster our network strategy, particularly the international growth opportunities we expect from our joint businesses with oneworld® partners in the transatlantic and transpacific markets," said Tom Horton, President, AMR Corp., the parent company of American Airlines and American Eagle. "We value the combination of size, range and performance of the 777-300ER, as well as the extensive customer amenities it offers. The seating capability of the aircraft will give us growth flexibility in slot-constrained airports and provide us with greater ability to serve new long-haul markets."

The Boeing 777-300ER is 19 percent lighter than its closest competitor. It produces 22 percent less carbon dioxide per seat and costs 20 percent less to operate per seat. The airplane can seat up to 365 passengers in a three-class configuration and has a maximum range of 7,930 nautical miles (14,685 km). The 777 family is the world's most successful twin-engine, twin-aisle airplane.