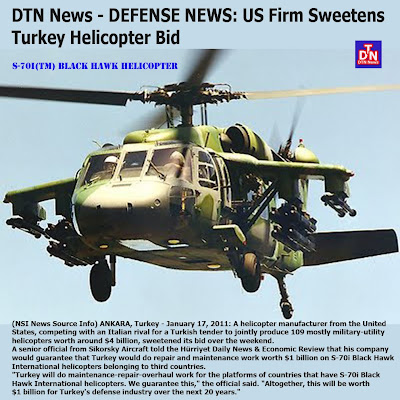 A senior official from Sikorsky Aircraft told the Hürriyet Daily News & Economic Review that his company would guarantee that Turkey would do repair and maintenance work worth $1 billion on S-70i Black Hawk International helicopters belonging to third countries.

"Turkey will do maintenance-repair-overhaul work for the platforms of countries that have S-70i Black Hawk International helicopters. We guarantee this," the official said. "Altogether, this will be worth $1 billion for Turkey's defense industry over the next 20 years."

Sikorsky Aircraft is offering Ankara the T-70, a Turkish version of the S-70i Black Hawk International, which already features in the inventories of several countries as the export model of the U.S. UH-60 Black Hawk.

Sikorsky's rival, the Italian AgustaWestland, is proposing the TUHP 149, a Turkish version of its A149, a newly-developed utility helicopter, in the tender.

At the last meeting in mid-December of the Defense Industry Executive Committee, Turkey's top decision-making body for defense procurement, the highly anticipated decision for the selection of the Turkish military's next utility helicopter type did not come.

Defense Minister Vecdi Gönül told reporters at the time that Sikorsky's and AgustaWestland's offers were both judged insufficient. The main point of disagreement was the price, the minister said. "Talks with both companies will continue, but we think they should cut their prices."

Turkey's decision is now expected to be announced in March at the next meeting of the Defense Industry Executive Committee, whose members include Gonul, Prime Minister Recep Tayyip Erdoğan, Chief of Turkish General Staff Gen. Işık Koşaner and procurement chief Murad Bayar.

In recent months, both Sikorsky Aircraft and AgustaWestland announced a series of sweeteners in return for the selection of their utility helicopters. The tender is for a first batch of 109 utility helicopters, mostly to be used by the military and security forces, but the number is expected to rise to a total of about 300 in the future.

A top Sikorsky official said in October that his company had a fourfold benefit package worth billions of dollars to offer to Turkey. "If Turkey selects us for the 109 helicopter program, we will buy another 109 to be manufactured in Turkey and export them to third countries," Steve Estill, vice president for strategic partnerships at the Sikorsky President's Office, said at the time.

Sikorsky is also proposing to buy $1.3 billion-worth of Turkish-made helicopter components, set up a regional Black Hawk support base in Turkey and invest in a future Turkish project to build a light utility helicopter, Estill said.

Shortly after, AgustaWestland challenged Sikorsky's proposal. "Our competition is offering the manufacture under license of an already existing product," Guiseppe Orsi, chief executive officer of AgustaWestland said late October. "We are offering much, much more ... We are offering Turkey to become a joint developer of a brand new product ... Turkey may become a real helicopter player in the world if it chooses us."

Nearly 8,000 utility helicopters are expected to be replaced with new models throughout the world in the next few decades, Orsi said, adding that his company's Turkish program could grab international orders for at least 800 of such upgrades.

Assuming that each helicopter's acquisition price and its lifetime maintenance cost are both around $25 million and the TUHP program gets orders for 800 platforms over the next 25-30 years, "this program would collect a total of $40 billion, half of which would go to Turkey," he said.

The Turkish military currently operates several different types of utility helicopters, with more than 100 S-70s, more than 50 older U.S.-made UH-1 Hueys, around 20 French-designed AS-532 Cougars and about 15 Russian Mi-17s comprising its helicopter fleet.

AgustaWestland earlier secured two contracts, worth billions of dollars, to lead the joint production of 60 T-129 attack helicopters to be used by the Turkish Army.