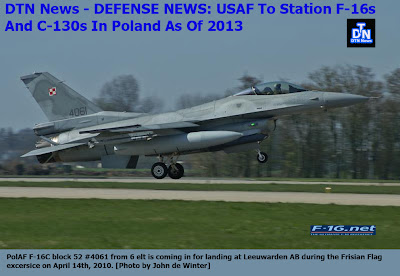 The US has offered to periodically station some of its planes in Poland beginning in 2013. Last month, Poland announced that it will accept the US proposal to host American F-16 fighter jets and Hercules transport aircraft.

Moscow says Warsaw should change its decision. The Russian defense ministry says Moscow will take the plans into account and carry out its own military development projects in response to the US move.

This is after WikiLeaks released documents revealing that NATO has secret plans to defend Poland and the Baltic states against Russia, the Voice of Russia stated.

Russian representative to NATO, Dmitry Rogozin, said that the leaked documents “cast a shadow on the results of the Lisbon Summit.”

The summit had adopted a statement last month that "clearly says the security of NATO countries and Russia is intertwined, and the NRC [NATO Russia Council] member states will refrain from any use or threat of the use of force against each other," a Russian foreign ministry spokesman told Interfax news agency.

NATO Chief Anders Fogh Rasmussen responded to the ordeal by saying the alliance does not consider Russia a threat to Poland.

Russian Prime Minister Vladimir Putin told CNN's Larry King in a recent interview that a threat from Iran is nonexistent. He also said that Russia would be forced to react in developing new nuclear weapons technology unless the United States Congress ratifies the Strategic Arms Reduction Treaty (START).
*This article is being posted from Toronto, Canada By DTN News ~ Defense-Technology News, contact: dtnnews@ymail.com