Source: DTN News - - This article compiled by Roger Smith from reliable sources Declan Walsh in Islamabad guardian.co.uk, Sunday 5 December 2010 12.00 GMT
(NSI News Source Info) ISLAMABAD, Pakistan - December 5, 2010: Saudi Arabia is the world's largest source of funds for Islamist militant groups such as the Afghan Taliban and Lashkar-e-Taiba – but the Saudi government is reluctant to stem the flow of money, according to Hillary Clinton.

"More needs to be done since Saudi Arabia remains a critical financial support base for al-Qaida, the Taliban, LeT and other terrorist groups," says a secret December 2009 paper signed by the US secretary of state. Her memo urged US diplomats to redouble their efforts to stop Gulf money reaching extremists in Pakistan and Afghanistan. 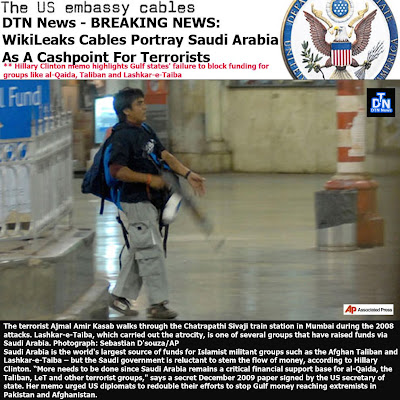 "Donors in Saudi Arabia constitute the most significant source of funding to Sunni terrorist groups worldwide," she said.

Three other Arab countries are listed as sources of militant money: Qatar, Kuwait and the United Arab Emirates.

The cables highlight an often ignored factor in the Pakistani and Afghan conflicts: that the violence is partly bankrolled by rich, conservative donors across the Arabian Sea whose governments do little to stop them.

The problem is particularly acute in Saudi Arabia, where militants soliciting funds slip into the country disguised as holy pilgrims, set up front companies to launder funds and receive money from government-sanctioned charities.

One cable details how the Pakistani militant outfit Lashkar-e-Taiba, which carried out the 2008 Mumbai attacks, used a Saudi-based front company to fund its activities in 2005.

Militants seeking donations often come during the hajj pilgrimage – "a major security loophole since pilgrims often travel with large amounts of cash and the Saudis cannot refuse them entry into Saudi Arabia". Even a small donation can go far: LeT operates on a budget of just $5.25m (£3.25m) a year, according to American estimates.

Saudi officials are often painted as reluctant partners. Clinton complained of the "ongoing challenge to persuade Saudi officials to treat terrorist funds emanating from Saudi Arabia as a strategic priority".

Washington is critical of the Saudi refusal to ban three charities classified as terrorist entities in the US.

"Intelligence suggests that these groups continue to send money overseas and, at times, fund extremism overseas," she said.

There has been some progress. This year US officials reported that al-Qaida's fundraising ability had "deteriorated substantially" since a government crackdown. As a result Bin Laden's group was "in its weakest state since 9/11" in Saudi Arabia.

Any criticisms are generally offered in private. The cables show that when it comes to powerful oil-rich allies US diplomats save their concerns for closed-door talks, in stark contrast to the often pointed criticism meted out to allies in Pakistan and Afghanistan.

Instead, officials at the Riyadh embassy worry about protecting Saudi oilfields from al-Qaida attacks.

The other major headache for the US in the Gulf region is the United Arab Emirates. The Afghan Taliban and their militant partnersthe Haqqani network earn "significant funds" through UAE-based businesses, according to one report. The Taliban extort money from the large Pashtun community in the UAE, which is home to 1 million Pakistanis and 150,000 Afghans. They also fundraise by kidnapping Pashtun businessmen based in Dubai or their relatives.

"Some Afghan businessmen in the UAE have resorted to purchasing tickets on the day of travel to limit the chance of being kidnapped themselves upon arrival in either Afghanistan or Pakistan," the report says.

One report singled out a Kabul-based "Haqqani facilitator", Haji Khalil Zadran, as a key figure. But, Clinton complained, it was hard to be sure: the UAE's weak financial regulation and porous borders left US investigators with "limited information" on the identity of Taliban and LeT facilitators.

The lack of border controls was "exploited by Taliban couriers and Afghan drug lords camouflaged among traders, businessmen and migrant workers", she said.

In an effort to stem the flow of funds American and UAE officials are increasingly co-operating to catch the "cash couriers" – smugglers who fly giant sums of money into Pakistan and Afghanistan.

In common with its neighbours Kuwait is described as a "source of funds and a key transit point" for al-Qaida and other militant groups. While the government has acted against attacks on its own soil, it is "less inclined to take action against Kuwait-based financiers and facilitators plotting attacks outside of Kuwait".

Kuwait has refused to ban the Revival of Islamic Heritage Society, a charity the US designated a terrorist entity in June 2008 for providing aid to al-Qaida and affiliated groups, including LeT.

There is little information about militant fundraising in the fourth Gulf country singled out, Qatar, other than to say its "overall level of CT co-operation with the US is considered the worst in the region".

The funding quagmire extends to Pakistan itself, where the US cables detail sharp criticism of the government's ambivalence towards funding of militant groups that enjoy covert military support.

The cables show how before the Mumbai attacks in 2008, Pakistani and Chinese diplomats manoeuvred hard to block UN sanctions against LeT's charity wing Jamaat ud Dawa.

But in August 2009, nine months after sanctions were finally imposed, US diplomats wrote that "we continue to see reporting indicating that JUD is still operating in multiple locations in Pakistan and that the group continues to openly raise funds". JUD denies it is the charity wing of LeT.