Source: DTN News - - This article compiled by Roger Smith from reliable sources Sikorsky Helicopters + Popular Mechanics(NSI News Source Info) TORONTO, Canada - October 26, 2012: In 2009 Sikorsky Aircraft built the world’s fastest helicopter, the X2, which clocked in at nearly 287 miles per hour and earned a PM Breakthrough Award to boot. Since then, the company has been incorporating the technology into designs for a new helo—the Raider S-97—which it plans to offer it to the U.S. Army in 2015. 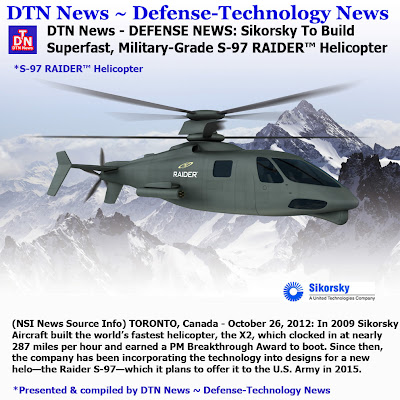 Like the X2 Demonstrator, the S-97 will use a coaxial rotor system. Its two rotors spin in opposite directions to stabilize the helicopter at high speeds, allowing it travel twice as fast as conventional helos. The S-97 will be twice as large as the X2, weighing in at 11,000 pounds, and capable of climbing up to 10,000 feet.

Sikorsky spokesperson Frans Jurgens told PM the S-97 would be able to hover with its nose pointed high or low without sliding backward or forward. "So it will have the ability to pirouette while keeping guns on-target," Jurgens says. "These are the kinds of maneuvers that only the X2 aircraft can achieve." The company plans to build the first two S-97 prototypes next summer and expects to get them off the ground beginning in late 2014.

Sivorsky has proposed the S-97 as a replacement for the Army’s aging fleet of OH-58 Kiowa Warriors. But the company will have its share of competition, and those competitors have already built their aircraft, while Sikorsky’s S-97 remains a design. Still, Jurgens is confident, arguing that none of the rivals build anything as revolutionary as the S-97. "With X2 technology, you can go twice as fast and twice as high," Jurgens says. "Current scouts can fly over only 40 percent of Afghanistan, because the land is so mountainous. The X2 can cover 97 percent."

In December the Army will decide whether to upgrade the existing Kiowa fleet or to launch an Armed Aerial Scout competition to find a replacement. Read more: Sikorsky to Build Superfast, Military-Grade Helo - Popular Mechanics

WASHINGTON, Maryland - Sikorsky Aircraft Corp., a subsidiary of United Technologies Corp. (NYSE:UTX), has selected 35 companies to join its team assembling two prototype S-97 RAIDER™ helicopters for evaluation by the U.S. military. Self-funded by Sikorsky and its team members, the RAIDER program will demonstrate the military applications of Sikorsky’s break-through X2™ rotorcraft design, which proved its capability in 2010 to double the cruise speed of conventional helicopters.